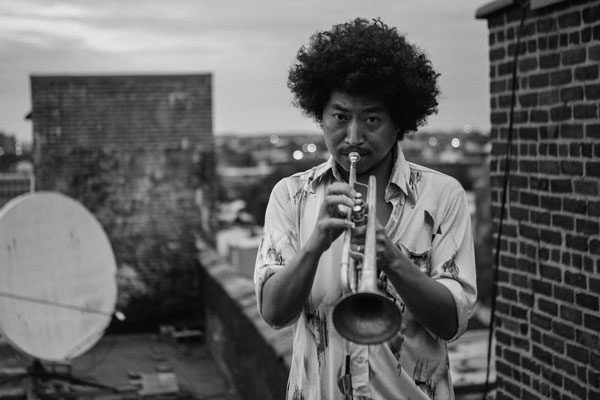 Whether moving from Japan to the U.S. or navigating between the influences of jazz, soul, hip-hop, Afrobeat and electronica, trumpeter/composer Takuya Kuroda has never followed a straight path. On his fifth studio album and Concord Records debut, the aptly named Zigzagger, Kuroda darts between those wide-ranging interests with a funky swagger and an intensely swinging vigor. The deeply infectious album finds the trumpeter snaking his way around the opposing poles of acoustic and electric, bristling grooves and blissed-out vibes, punchy brass and fluid synths, carving his own distinctive sonic path along the way.

“Life is sometimes not that easy, sometimes not so difficult, and it should never go straight,” Kuroda says. “It’s always zigzagging. So I put my soul and spirit into that word.”

Though it wasn’t intentional on Kuroda’s part, the title also can’t help but evoke The Sidewinder, Lee Morgan’s 1964 classic that became one of the touchstones of the then-burgeoning soul-jazz style. Morgan has been a major influence on Kuroda as a player and as a conceptualist, and with Zigzagger the 36-year-old trumpeter offers his own take on the state of the soul-jazz art more than half a century later. His music takes into account the electronic innovations of artists like Flying Lotus and J Dilla, while remaining true to the window-rattling funk and soul-stirring grooves which forcefully carry on the tradition.

Kuroda’s vision is realized with the help of his regular working band, most of them friends and collaborators for more than a decade since attending New York City’s New School together. They include trombonist Corey King, who also shows off his vocal chops on the simmering neo-soul tune “Do They Know;” bassist Rashaan Carter; drummer and percussionist Adam Jackson; and the band’s newest addition, keyboardist Takeshi Ohbayashi, who joined up in 2011. Three tracks bolster the band with master percussionist Keita Ogawa, who first crossed paths with Kuroda 20 years ago at jam sessions in their native Japan. Album closer “Think Twice” features the electrifying sounds of the popular Brooklyn Afrobeat band Antibalas.

Produced by Kuroda himself, Zigzagger is more purely an expression of his own distinctive approach. It maintains the unified style and infectious grooves of his earlier work, but mixes things up with more eclectic, shifting inspirations and perspectives. “When I write music I see a lot of elements and put them in different places, with different angles, a lot of counterpoint and strong melodies,” Kuroda explains. “It’s always easy to sing to, but has something like advanced changes underneath, kind of hidden so that people don’t get confused by the difficult elements. But it’s there. Musicians always tell me my music is easy to listen to but difficult to play.”